Detroit, MI – All Sports Television Network announces that it will air the esports docuseries “Girl Gamers: Now Is Our Time”. The three-part series, which will begin airing the week of April 3, takes a look into the world of gaming and its impact on female gamers t 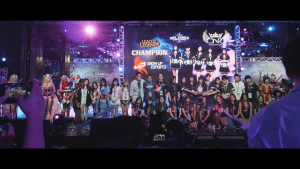 hroughout the globe. It also delves into the trials and tribulations experienced by young women wanting to participate in esports.

“As esports has grown over the years, the female community of gamers has been underrepresented on the international scene. As a result, this creates a perception that females are not as passionate as males about gaming,” stated Roger Neal Smith, President of the All Sports Television Network. “This docuseries clearly illustrates that females are just as engaged and are as talented as their male counterparts.”

“The Girl Gamers docuseries chronicles the struggles that women still have in the gaming space but also celebrates all these awesome gamers that are paving the way for future generations of women pro gamers,” said Sharon Lin of Metta.gg, a founding partner of the event. “GIRLGAMER’s existence has been pivotal to raise awareness and empower the female communities in esports.”

About the Girl Gamer Challenge
The GIRL GAMER Esports Festival (www.girlgamer.gg), which first began in 2017, is an exciting, award-winning

event focused on celebrating women’s competitiveness in esports. It gathers popular esports athletes, casters, and cosplayers, and is building a diverse worldwide fan base of women inclusion supporters.