Detroit, MI – All Sports Television Network (ALL SPORTS) announces that it has signed a deal to air the Wichita Force 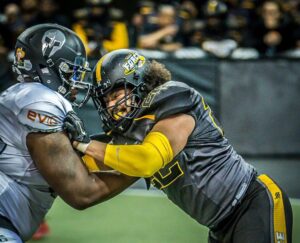 “We are looking forward to a new season of Wichita Force arena football,” stated Roger Neal Smith, President of ALL SPORTS. “Arena football is a great way to satisfy the needs of die-hard football fans during the spring. The fans’ ability to get extremely close to the action makes the experience even more exciting.”

“We always want to partner with the best, so we are thrilled to team up with All Sports Television Network again this year to bring our games to fans everywhere,” stated Jeff Martin, Wichita Force Managing Partner.

The Arena Football Association (www.arenafa.com) debuted in June 2021 as a five-team league. It expanded to six teams for the 2022 season with the addition of the Wichita Force and the Magnolia State Spartans. The 2022 AFA season will be played from April to July. The League’s championship game, The Carrier Cup, is slated to be contested aboard the aircraft carrier USS Lexington, which is stationed in Corpus Christi, Texas. AFA teams include the Wichita Force, West Texas Warbirds, Texas Jets, Rio Grande Valley Dorados, Magnolia State Spartans, and the North Texas Bulls.