Detroit, MI – All Sports Television Network (ALL SPORTS) will begin broadcasting “Countdown to Qatar”, a 40-episode television series. The series, which will air beginning in September, is extensive lead-in coverage previewing all the nations, 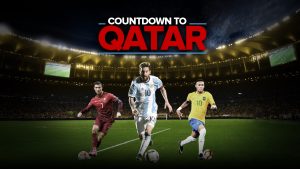 players and the host nation as Qatar prepares for the World Cup, sport’s biggest event of 2022.

Countdown to Qatar is a thirty-minute program featuring stories about the teams that will be competing in the 2022 World Cup. Each episode features a different country and the major players who will be appearing to represent them.

“We are excited about having the opportunity to feature “Countdown to Qatar” on the network,” stated ALL SPORTS President Roger Neal Smith. “I believe that this is just the start of increasing our presence on the world stage, which could not have been done without the assistance of some of our corporate partners.”